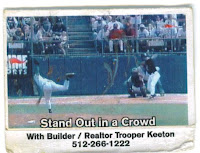 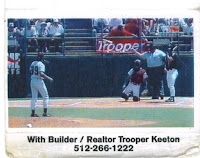 Some who have dared to venture to www.trooperkeeton.com have come to wonder just how big an ego Trooper has. Well I guess it's big enough for me to sometimes write about myself in the third person. But kids, a writer has to have a healthy ego to sit down and write whatever comes from their mind. Trooperkeeton.com is out there to attract a buyer for a Keeton home or provide services in the real estate field. However, it is also about just plain old fashion fun, especially the football player section. Now that's the section I really wanted to comment on. I am not trying to brag as much as to relate to the average Joe or Joan. I did not play a down of varsity ball at Tech so I can't expect to blow my Gabriel horn too loud. That whole business is to provide memories that we can ponder. Now, later in life where I persevered to make a minor league football team with very few credentials, now that's a different story. Go Seagulls.
Now as pictured above at the ball game its nothing but shameless self promotion!
St. Paul may have said it best; "Whoever had much did not have more,
and whoever had little did not have less".
Posted by The Blog at 12:45 PM No comments:

The Vatican vs the Nazis 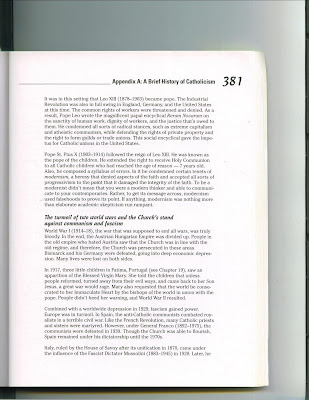 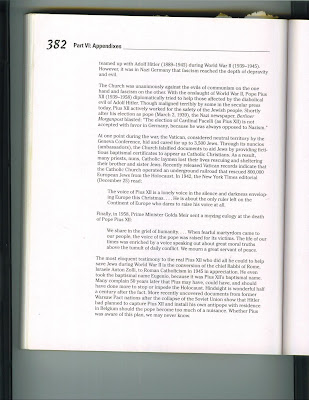 I hear from time to time that the Vatican was on vacation during WWII and did not do enough to stop Hitler. They did and do have the Swiss guard armed with spears. They could have held them off about as long as the horse cavalry of the Polish army did. In case a similar situation arises again I suggest the Vatican adopts an Air Force.

For reallity click on the printed images to enlarge and read
Posted by The Blog at 12:59 PM No comments:

St. Paul is recognized as the greatest Christian Saint. I just came to realize that he was and is a great u niter. If one is Christian, his life is easily accepted because he converted to Christianity from Judaism. Also, if you are a good Jew you probably really don't want to kill Christians as Paul did early on as a Roman soldier. So the Jews can think favorably of him even those he jumped ships. Most folks of the Jewish faith like and respect Jesus of Nazareth. They just don't think he is the messiah. So if Paul did stray by becoming a Christian all can rest assured that he came from good stock. With this being said I would like people of all faiths and non faiths to check out St. Paul. I found a little book called the meditations of St. Paul. It is as good as any of the new age self help books.
Posted by The Blog at 1:28 PM No comments: