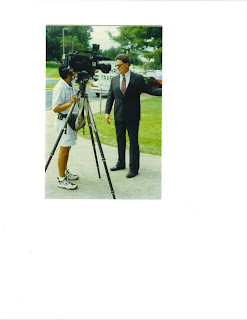 Kent has spent to much time in Austin or maybe he is bucking for a job at ESPN. I spoke with my tile man who had been working that day, he asked me what did they get him on, tourcher? With ESPN taking up for the rich kid and painting a pictue of electrical closets, I thought Karl Rowe must be directing this propaganda. Then it hit me, Hance already has one on the king pins on staff. Who needs Karl when you got Alberto. For more: http://www.youtube.com/watch?v=f8Tpqh-xDJM
Posted by The Blog at 8:59 PM No comments:

His Biggest Mistake Was Winning!

Down here in Texas nobody messes with Texas University for very long. Some who do, go away quietly as the Hogs did. Others who build there programs up enough to be competitive with the University find themselves in trouble with the NCAA, ie. SMU, TCU and the University of Houston. If a competitive University has influence, Coaching problems may arise as it did over the years at A&M. If you recall some strange things happened dating back to Bear and Jackie Sherrill. Not to mention that craziness that went on with Francione. Remember he left the mighty University of Alabama in the middle of the night to go and wreck the wrecking crew at A&M. Maybe if he was influenced by a third party it would explain why he did not have the courage to say good bye to his Tide. If you are not at least staring to wonder that something maybe going on behind the scene, I ask you. Who in their right mind would turn the Burnet kid who was like a Pro pocket passer in high school into a running option Quarterback in college as did Fran.
Now comes Texas Tech and Mike Leach, as they move the ball rather freely against Texas and rise up and trounce Oklahoma in 09.When I heard the word that Tech’s Mike Leach was suspended for the Alamo Bowl game I thought it was a misprint. Then when I heard it was true and it involved the James family. Well, it’s just a rich white boy, son of a ESPN announcer who wasn’t getting enough catches. All year I wondered why they weren’t throwing to Craig’s boy more. Maybe looking back they should have. If the James’s were a bit disgruntled that might have opened the trap door for this coup.
My thoughts were enhanced by a call from Bristol, the headquarters of ESPN. It was during the Texas vs. Oklahoma State game. The TV announcers were order to stop questioning the official’s calls. Well in case you don’t know, before the game got out of reach for the Cowboys, all the call were going for the Horns. So what they really meant was don’t blow the cover. So when I explain that what is going on down here in Texas, is more that just home cooking, I am not just whistling Dixie.
PS. If there is a Bristol Texas, I am not talking about it. The call came from Bristol, Connecticut. That’s not only north of the Red River it’s north of the Mason-Dixon line. More: http://www.youtube.com/watch?v=lR_7e3_aoq0
Posted by The Blog at 8:57 PM No comments: 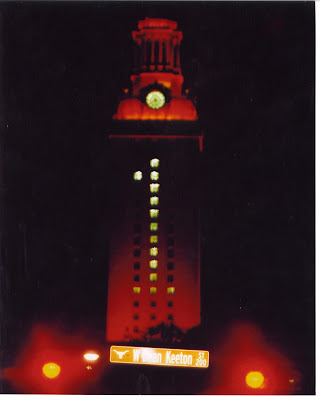 Most unbiased fans are aware the the Tech/Texas game was a little funky to say the least. Another helmet to helmet non call ie. Graham Harrell, 2007 game; see older blog "Gotta you Ump". Money calls (game changing calls) going for UT. In a nut shell, I think the powers at be did not want to see Tech or anyone else for the matter knock Texas out the the BCS Championship game. So, lets move Tech up to the third game since they are breaking in a new QB, Taylor Potts, tellem its for TV. Then if Tech does start to move the ball on the opening drive, which they did, let lose with the laundry, which they did. If a 104,000 fans can't throw Potts and the Red Raiders off on the opening drive one or two or three of Randy's crew who slipped in under another head can. I am not going to go on if you saw the game on National TV you know what I am talking about.

You look at some of the other regular season games and you will see a lopsided scores and many of you will go brain dead. I will only say if the refs call enough money calls against you, taking away your momentum the roof will fall in on you and you will lose.

Well this brings to the big twelve or big eight plus four (until the old SWC schools start wrestling) its not really that big. At the end or apparent end maybe there was a fraction of a second left on the clock(.399). I just don't recall a football game being over and someone puts a clock on the TV screen which we have never seen before and declares it's not really over. Regardless of that strange ending the fact of the matter is the game was decided on a pass interference call that gave UT a touch and opportunity for a kick to decide the game. If you saw the movie the Great White Hope his handlers told him he had to take a dive in the championship fight. He protested only to find out that most of his fights had been fixed. Well If Texas can hold there own against Bama, them OK maybe I am wrong about this 09 season.
Oh! PS. on spell check the computer did not recognize SWC it suggested SEC. Did not the SEC throw out or sanction a crew not long ago?
Oh No! go to:http://sports.espn.go.com/ncf/news/story?id=4583642
Posted by The Blog at 2:11 PM No comments: