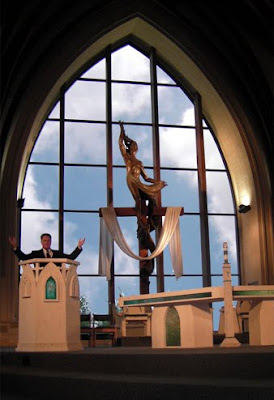 George was not only the greatest clutch player but the toughest football player to ever live. When is was playing QB at St. Thomas High in Houston one day Coach Mike Mashon asked who has to be the toughest player on the field? He then turned and pointed to me and said you do, your the quarterback. Well George lived up to Mashon's teachings.
This was first called to my attention by Tallimeane at the bowling alley when we kid would hang out with the Oilers. I once got the nerve up to ask Bob who the toughest player was on the team. I expected him to say Dewvall or Cannon. But no he said Blanda was the guy he would least like to fight and fight they did back in the AFL.
This statement was verified in a home game against the Raiders before George was traded to them. Blanda had just thrown a pass and the whistle had blown when some big D end hit late. George was knocked on his back. The defender gloated for a moment and turned back to the line. It wasn't over, bad move for George came quietly up to his back side and kicked him in the rear end with a patented Blanda kick. At that point it was on, another Raider came into the picture to do bodily harm when Cannon cut him off with a body contact hit that send the man sailing. Then all eyes were back on George and the big bully. The bully attacked charging a relaxed Blanda. George commonly took a couple steps back ie. Mohammad Ali style letting the angry defender over extend himself leaving his head on the chopping block for George to chop the back of the neck, only after pulling off his helmet from the back, to finish the fight faster than the blink of an eye.
George I am going to keep going to church so I can see you in heaven. I will not be hitting you late. Love, Trooper

http://www.youtube.com/watch?v=5zneVVMxZBA
Posted by The Blog at 4:03 PM No comments:

Can't you see it. UCLA demands that Ut's hand picked ref's do not call the game and guess what , Ut losses. Did you noticed Ut in first half finally got called for their receivers blocking down filed before the ball is caught. They have been doing the same thing against us for years. I think they teach that and stuff like helmet to helmet knowing it won't be called.
I think in our game with minds starting to wonder that have taken it to a new level. Look the two coaches who have brought it to attention are now both unemployed. I am not talking about home cooking but BCS money. Its money calls (game changing calls), make up calls (to be compared in the morning paper), and now cover up calls (to defuse; ie. sideline infraction instead of helmet to helmet).
In closing let me explain. Ut has always from day one in the 30's, 40's, 50's, 60's, gotten the best recruits but they did not always win. Do you really think Max Brown is the difference? No kids its a few touched refs like (ie. the crew from the SEC who was suspended last year). Even the Aggies are wakening up like Nebraska and Arkansas did. Don't you get it.
Posted by The Blog at 2:04 PM No comments:

In the first half after a holding call on Texas I turned to Tino and told him that is a no no and that ref would be read the riot act at half time. Sure enough no more holding on UT in the second. But plenty of money calls on Tech like pass interference and taunting. Remember in the 08 victory the phony offensive interference call on Crab at the 6 yard line that killed the td before the last time we got the ball.
This years game I think they the hand picked officials have turned it into a fine science of masterful deception. I even started to wonder if the officials on the field are being directed from above. Like a vibrating cell on out last drive meaning kill the drive. So the signal is on and a almost taunting appears and without thinking grab the flag and throw it.
I could go on but we were beat when they got Mike fired. Ut has a very good history department and it is written in the annuals of ancient Roman, “It is better to have a General with no army than an army with no General”.
Posted by The Blog at 5:59 PM No comments: