The Set up! To fire Mike Leach 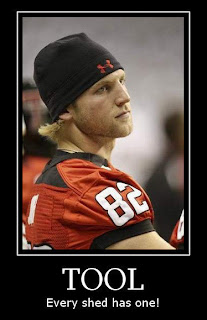 Another possibility for the conspiracy. Craig James has dribbled that he might run for Kay Baby's seat. Since Adam may have gotten his scholarship as a political favor through Hance. Now that they got Mike's scalp, do you think that they had planned for Craig using his current response, "I did what any father would have done". Dastardly publicity and unwarranted sympathy to launch the leader of the James gang into the U S Senate?
No Mr. James most fathers would have instructed there son to not be brat and do what the coach tells you to do. Real players do not wear sunglasses and there hat on backwards to practice when everyone else has helmet and shoulder pads on. Should you wine about being light sensitive and having a headache you accept the trainer taking you out of the sunlight and into the coaches media room.
Posted by The Blog at 12:03 PM