My on the field experience with Mean Joe Green 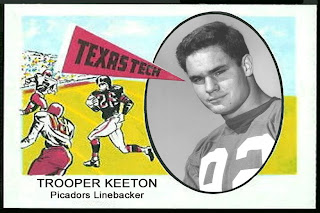 One Response to “Heart of a Champion: The 40 Toughest Players in NFL History”

Got something to say?

Got the film of this game. I wanted to show Eddie's encounter with Mean Joe. It does show him heading Joes's way as he goes out of camera. Well I suppose I will put it up. That will give me an excuse to feature your truly and my last play suited up in a Tech game uniform. I went out with a big one, a 15 yard pass interference penalty. But anyway last night while reviewing that 65 Freshman game I began to believe that this game may have had more significance than what meets the eye. That bunch of Texas Tech freshmen went on to beat Texas two of their three varsity years. They lost this freshman game to little O'North Texas. We the Picadors of Texas Tech were all white. The North Texas freshman not only had Joe Green but Richard Black and a small but significant number of black players. Maybe this game played a part in breaking down the white boy only door? One other thing I never was on the field with Joe again but I ended up playing against, with and for Richard Black 12 years later in the minor league AFA.