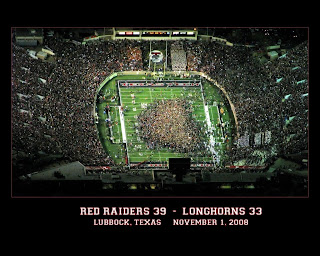 Divine intervention in Collage football, or Possibly Intention? No there is no 5 yard bump rule in college football. The problem is the UT defender bumped the Texas Tech all American receiver Micheal Crabtree. Yet some confused or misdirected ref called offensive interference. All Micheal did was a swim move to the flag to avoid being held up. So instead of Tech touchdown or second and goal at the Texas 3 yard. Line it was first and goal at the 25 yard line. This little call killed the touchdown drive with about 5 mins. left in the game. Tech kicked a field goal( take away the 7 add 3 to recorded score). Now while you have your calculator out subtract 7 pts. from the UT score because the flag for the blocks in back should never have been picked up after the Shipley returned the punt for a TD. Reality final score Tech 36 Texas 26.
Yes there were various other infractions but these were game changing penalties. Were the refs read the riot act at half time? Would have Tech 36 Texas 26 have dropped Texas further from a BCS bowel game? If the almighty had not been watching from above would the refs have decided the 2008 game as they did the 2007 game? For the sake of college football and the BCS should we not clear this situation up here on earth?. The image shown above came from above. Cannot except Divine Intervention, read about the explanation of Intention in the comment section.
Trooper Keeton Texas Tech class of 69. (trooperkeeton@earthlink.net)

Friday at coffee one of the great thinkers in my group suggested, intention. At first I thought it was atheist. But no the professor informed me that its Hindu. I checked with Father Connely if this would go against Christian teaching and he thought not. So to prevent the Longhorn fans from wondering if God loves the Red Raiders more, I will officially suggest the miraculous win was possibly intention rather than divine intervention. Intention in reference to such an event as this is when one or more desire a particular out come. It helps is this communal wish is positive. Maybe we should go with this intervention thing explanation, for proclaiming divine intervention for explaining good things and blaming God for bad things kinda goes against the our
God given gift of free will.
Fellow sports fans do not let all this trouble you too much. Take heart for St. Paul (aka. the apostle Paul), once said, "We can only know imperfectly".